A revolutionary robotic exoscope which allows surgeons unprecedented 4K-3D views of the brain and spine during surgery has been installed at The James Cook University Hospital in Middlesbrough. The exoscope, named ORBEYE, allows surgeons to become untethered from traditional ocular microscopes and instead operate from a 55” monitor in real-time. The technology has extremely powerful magnification and coupled with natural 3-dimensional technology, ORBEYE allows surgeons to see the finest of anatomical structures in deep parts of the brain.

Normally, a surgeon would use a traditional microscope to see fine anatomical details, often enduring hours in uncomfortable positions looking down into the eyepieces. This is a big problem, as surgeons go onto develop working-musculoskeletal disorders which can often increase fatigue during surgery and reduce operating career-length. Instead, using ORBEYE surgeons can access these same areas but instead look straight ahead at the large 3D monitor.

For patients, being operated on by ORBEYE means surgical incisions are potentially smaller, therefore resulting in a shorter stay in hospital, quicker recover time and lower risk of infection.

Unlike some traditional microscopes which exclude the team from viewing the surgery, ORBEYE allows the wider medical team to see exactly what the surgeon is seeing in real-time, facilitating clinical discussions between clinicians and making ORBEYE a great teaching tool for the next generation of neurosurgeons.

ORBEYE represents a first step into the digitisation of neurosurgical imaging. This will mean in the near-future, optimising technologies such as artificial intelligence will be able to be incorporated into ORBEYE and used to accelerate beneficial patient outcomes in microsurgery.

The ORBEYE represents a significant step forward in neurosurgical imaging for James Cook Neurosurgery Department as a result of its state-of-the-art new exoscope with 4K-3D views of the brain and spine during surgery. In layman terms, an exoscope is a hybrid between the conventional operating microscope and endoscope.

Clinical Director for Neurosurgery and Consultant Neurosurgeon Mr Manjunath Prasad, said “The ORBEYE is a leap into the next generation of technology. Although there will be a prolonged period of overlap with the microscope, the ORBEYE exoscope provides an exciting alternative and additional resource. The microscope we had gave just 2D images, but with ORBEYE it displays fantastic images on a 3D screen which makes it better for efficiency of movement and safety during some very critical periods of surgery, thanks to the clarity of the images, less clutter in theatre and decreased surgeon fatigue.”

Sarah Morley, Sister of Neurosurgery Main Theatres said “Middlesbrough is the second centre in the NHS to have the privilege of using this cutting edge technology and it gives us the reassurance as staff that we are not being left behind and are continuing to innovate”.

Kirsty-Anne Lewis, Sister of Spinal Neurosurgery Theatre said “Firstly, ORBEYE is really easy to set-up, there is less clutter and it’s a smaller footprint. It provides an unobstructed view in theatre for everybody and it’s better visibility of the operating field real-time which makes us feel safer”.

Nathan Hooker, National Sales Consultant at Olympus, said “James Cook‘s investment in ORBEYE is great for the patients of Middlesbrough and really propels the neurosurgery department into a new era of intraoperative imaging. I’m really pleased to see the platform so coveted with the team here and can’t wait to begin”. 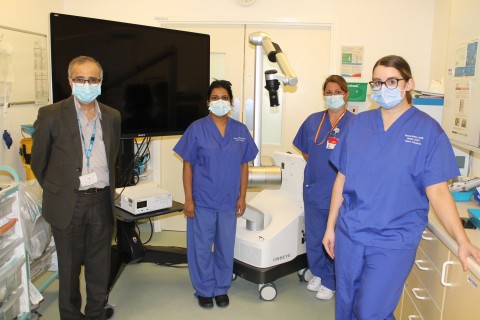 By downloading or using images or videos offered on this website (“media assets”), you agree to the following licence agreement:

I have read, understood, and agree to the Media Usage Agreement.